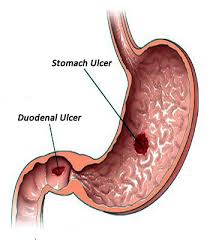 Ulcers are common in our society: About one out of every 10 Americans will suffer from the  a peptic (or gastric) ulcer at some point in life.

Peptic ulcers are holes or breaks in the protective lining of the duodenum (the upper part of the small intestine) or the stomach — areas that come into contact with stomach acids and enzymes. Duodenal ulcers are more common than stomach ulcers. Comparatively rare are esophageal ulcers, which form in the esophagus — or swallowing tube — and are often a result of exposure to medications, like certain antibiotics or anti-inflammatories, or alcohol abuse.

While excessive stomach acid secretion certainly plays a role in the development of ulcers, a relatively recent theory holds that bacterial infection (H. pylori) is the primary cause of peptic ulcers.

Other factors such as overuse of over-the-counter painkillers (such as aspirin, ibuprofen, and naproxen), heavy alcohol use, psychological stress, and smoking may promote the development of ulcers, especially in someone with H. pylori.

People with type A blood are more likely to develop cancerous stomach ulcers. Duodenal ulcers tend to appear in people with type O blood, possibly because they do not produce the substance on the surface of blood cells that may protect the lining of the duodenum.

Peptic ulcers are treated, and  in many cases they are cured with antibiotics, antacids, and other drugs that reduce the amount of acid produced by the stomach. There are also a variety of self-help and alternative treatments that can aid in relieving pain

However, the dangers associated with peptic ulcers — such as anemia, profuse bleeding, and stomach cancer — are serious, so ulcers should always be monitored by your doctor. 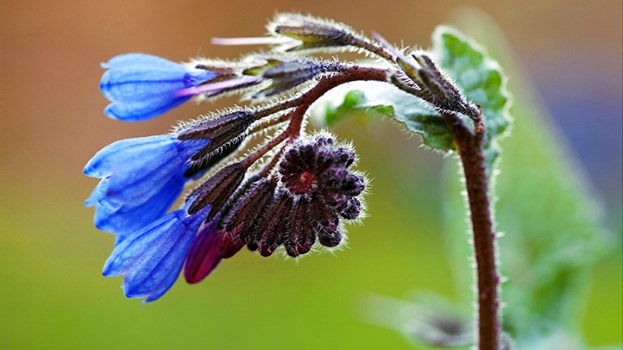 An “all-natural” herbal product might sound like it’s good for your health, but some common ones, like green tea extract and comfrey tea, can cause injury to your liver — the organ that breaks down medications. And whether your liver is doing well or you have a disease like fatty liver or hepatitis C, you’ll want to keep your liver in the best shape possible.

Drug-induced liver injury, a form of liver disease, is on the rise as herbal and dietary supplements have become more popular over the last decade, according to the American College of Gastroenterology.

Though still rare, doctors have seen more herb-related cases of liver injury in recent years, says James H. Lewis, MD, professor and director of hepatology at the Georgetown University Medical Center in Washington, D.C. And the proportion of liver injuries caused by herbal and dietary supplements rose from 7 percent in 2004 to 20 percent in 2013, according to a July 2015 report in the World Journal of Hepatology.
1. Beware of the big liver offenders. Green tea extract, anabolic steroids, pyrrolizidine alkaloids, and flavocoxid (an herb sold to treat arthritis) are among the top substances that can cause liver injury, according to 2014 clinical guidelines published by the American College of Gastroenterology.

If you love green tea, rest assured: Drinking up to 10 cups a day is safe, Halegoua-De Marzio says. It’s the high doses of green tea extract usually found in weight-loss supplements that cause damage.

Meanwhile, comfrey — which is sold as a tea, powder, and capsule — contains several pyrrolizidine alkaloids that may cause liver injury, according to the U.S. National Library of Medicine (NLM) and the National Institute of Diabetes and Digestive and Kidney Diseases (NIDDK). Chaparral, kava, and skullcap can also damage your liver, they report.