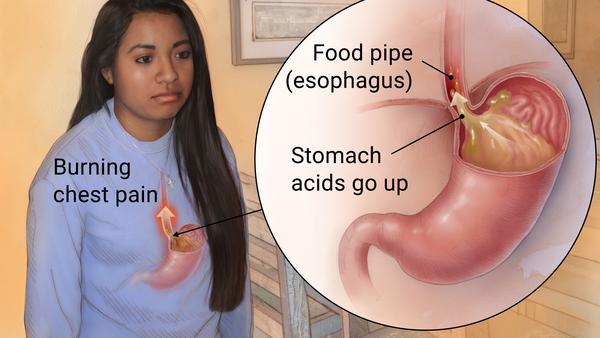 Gastroesophageal reflux disease, or GERD, is a digestive disorder that affects the lower esophageal sphincter (LES), the ring of muscle between the esophagus and stomach. Many people, including pregnant women, suffer from heartburn or acid indigestion caused by GERD. Doctors believe that some people suffer from GERD due to a condition called hiatal hernia. In most cases, GERD can be relieved through diet and lifestyle changes; however, some people may require medication or surgery.

Popular over-the-counter medications like Tums, Maalox, Rolaids and Mylanta neutralize stomach acid and provide fast-acting relief in mild or isolated cases of acid reflux. Some antacids come in liquid form to coat the lining of the esophagus and help reduce the amount of acid in the stomach.

If left untreated, chronic gastroesophageal reflux can cause complications such as esophagitis, esophageal ulcers, bleeding, or scarring of the esophagus. Laparoscopic antireflux surgery (also called Nissen fundoplication) is used in the treatment of GERD when medicines are not successful.