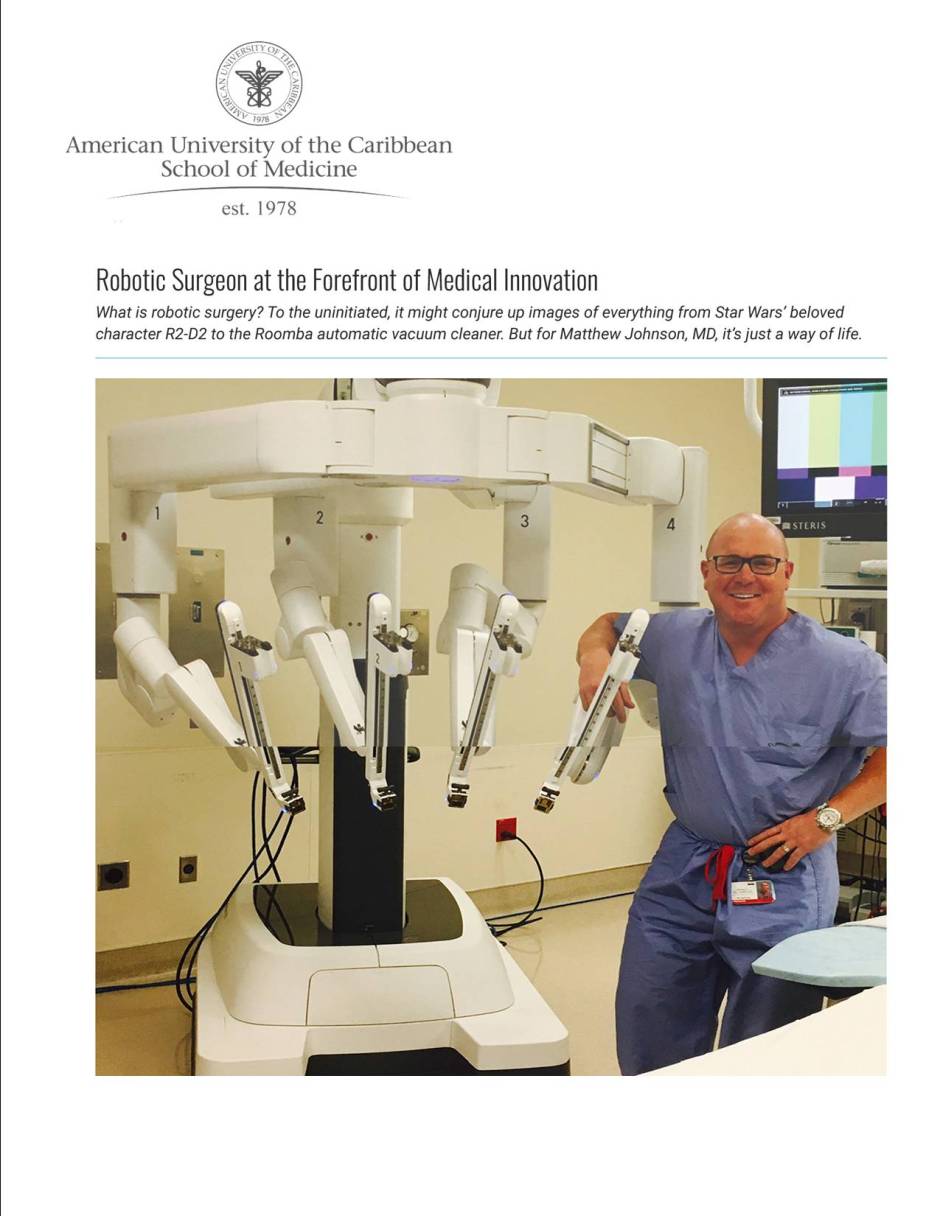 What is robotic surgery? To the uninitiated, it might conjure up images of everything from Star Wars’ beloved character R2-D2 to the Roomba automatic vacuum cleaner. But for Matthew Johnson, MD, it’s just a way of life.

Dr. Matthew Johnson, MD ’05 with the Da Vinci robotic surgery system.
As a board certified robotic surgeon, Dr. Johnson performs surgery using very small tools attached to a robotic arm, which he controls with a computer. The robot follows his hand movements to perform the procedure using the tiny instruments, and a 3-D camera allows him to view enlarged images of the patient’s body throughout the surgery.
The benefits? Tiny, robot-manipulated tools mean greater precision and smaller incisions than traditional open surgery. This results in a host of other positive outcomes: reduced blood loss, quicker healing time, decreased risk of infection, and shortened hospital stays.
“I do about 95 percent of my surgeries robotically now,” said Dr. Johnson, who began using the method about three years ago. “The instruments are so precise. It’s really a great thing.”
Starting a Career in Surgery
A Houston native, Dr. Johnson had wanted to be a physician since he was ve years old. His passion grew from playing doctor with his family to majoring in microbiology at the University of Texas at Austin. The culminating experience was after college, when he joined his father on a business trip to Holland. His father was a lawyer who worked with several Dutch cardiac surgeons, and Dr. Johnson had the opportunity to watch a nine-hour double aortic replacement surgery.

“Once I saw that, I just said, ‘wow, this is it,’” says Dr. Johnson.
Now, more than ever, he knew that surgery was the career for him. But he had a critical obstacle—he wasn’t accepted into the U.S. medical schools he’d applied to. He wasn’t a great test-taker, and his MCAT score didn’t fully reflect his abilities. So he chose to apply to a medical school that looked beyond the numbers: American University of the Caribbean School of Medicine.

“It was incredible,” said Dr. Johnson. “I miss it every single day. And I did my third-year clinical rotations in England—if I had gone to an American medical school, I wouldn’t have been afforded that opportunity. I was able to travel everywhere.”
After graduating from AUC, Dr. Johnson completed his surgery residency at University of Nevada School of Medicine in Las Vegas, where he served as chief resident and earned the Professionalism Award. He stayed at UN as a fellow in the acute care surgery program. UN was the first in the country to develop this fellowship, which combines a year of surgical critical care and a year of acute care surgery.
“It makes you prepared for anything surgical that comes in the hospital. You know you can take care of it,” said Dr. Johnson.

Getting a Patient Back in the Game
Today, Dr. Johnson continues to work out of Las Vegas, where he is associated with several different hospitals. He specializes in gallbladder, hernia and foregut surgery, as well as trauma, general and acute care surgery.
“I can’t imagine myself doing anything else,” he said. “With surgery—especially trauma—you don’t know what’s coming. You know what the books have said and what your training has provided you, but it’s spontaneous. You see the patient and sometimes there’s blood coming out of every orifice and organ there is—you have to know what to do and how to take care of it. It’s fast and furious. You just have to stop the bleeding.”
One of his most memorable experiences was treating a 14-year-old boy with life-threatening injuries to his pancreas, small intestine and colon from a bad hit in a football game. The boy spent a month in the hospital. A year later, he’s made a full recovery and is back on the football field as an All-Star player.
He and Dr. Johnson still keep in contact—in fact, Dr. Johnson cheered him from the stands at a recent game.
“Patients like that really touch my heart,” said Dr. Johnson. “The patient and their whole family are so thankful. And for me, to know that my team and I have saved a life—it means so much.”
No matter the situation, Dr. Johnson prides himself on being a compassionate doctor.
“Spending that extra time and showing compassion often get lost in the workload. I do as much as I can to make sure that doesn’t happen,” said Dr. Johnson. “It’s worth spending that time. I just try to let them know I’m here and that they’re going to be okay.”